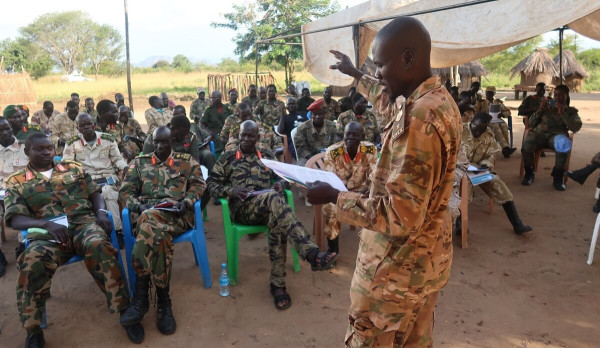 The Irube cantonment site, located in Eastern Equatoria, is one of four such sites in the state and is home to several opposing Sudanese People’s Liberation Army personnel (SPLA-iO ) waiting to join the Unified Force needed to serve their country. .

This SPLA-iO force group is the usual beneficiary of capacity building trainings provided by the United Nations Mission in South Sudan (UNMISS).

Recently, UN peacekeepers were again in cantonment to conduct a human rights workshop for more than 50 senior officers.

“We often find familiar faces among the participants. However, questions posed during the sessions suggest that the information we previously shared has not been widely disseminated, ”revealed Rosemary Astini, a human rights official working with the United Nations peacekeeping mission. United. “Obviously, we need to keep these sessions going. “

The forum, which aimed to deepen military officers’ understanding of international humanitarian and human rights law and conflict-related sexual violence, is expected to help prevent violations that can occur when military forces live. close to civilian populations.

“The absence of rapes and murders in this area, for example, is proof of the healthy relations between us and the civil authorities and the population,” assured Brigadier John Kenyatta, acting commander of the cantonment site.

“Although we are separated from our families and lack basic necessities, we do everything possible to live in harmony with the surrounding communities; in turn, they also help us a lot, ”said Lieutenant-Colonel Thomas Lodovico Oryem.

The participants also quickly pointed out some particular challenges encountered on the site and called for help.

“Female staff lack feminine hygiene products and other toiletries. Shortages of water, food, medicine, shelter and even civilian clothes to change into when we are not on duty are a continuing concern, ”said Col. Beatrice James Francis. “Last year, a humanitarian organization distributed items to us, but everything disappeared.

“As you can see, we are locked up when it rains due to poor road conditions and we cannot connect with neighboring communities,” said Renato Ohetan, a senior officer.

Small group sessions interspersed with simulation exercises identified several recommendations to promote, protect and respect human rights laws, such as the creation of human rights units or focal points within forces to monitor and report violations, and ensure ongoing awareness.

“I think this period of peace demands that such UN formations target joint opposition and government forces. All the forces of the revitalized Peace Agreement should be trained together and not separately, ”suggested Lt. Col. Lodovico. “Commanders should also be empowered to continue to educate their officers about the laws. “

Distributed by APO Group on behalf of the United Nations Mission in South Sudan (UNMISS).