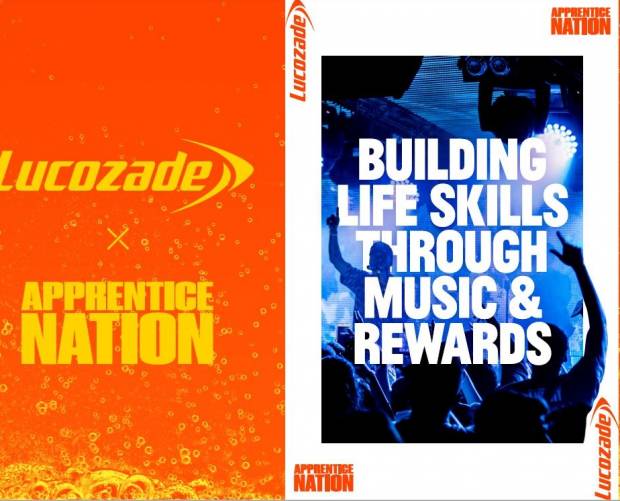 The Apprentice Nation platform uses music to inspire and engage young people to prepare for careers and learn basic skills for work and life. It has reached millions of young people to date by providing them with the tools they need to be successful. However, recent government research shows that the inactivity rate among young adults is near an all-time high and unemployment is significantly higher among young people (13.1%) than among the general population ( 4.7%). Another government study shows that people from under-represented ethnic minority communities are more than twice as likely to be unemployed. Lucozade, in collaboration with Apprentice Nation and main partner BT, hopes to play a role in addressing these issues in a way that young people find meaningful and accessible.

Lucozade aims to help 16-24 year olds find their confidence through the power of music by collaborating with Apprentice Nation on a series of webinars and on-demand content, featuring performers from an upcoming concert, while offering life and work skills, advice and tips via its edutainment platform As part of this initiative, Lucozade will support a new co-created educational pillar called Unblock your Potential, which aims to prepare young adults for success called, through a tenor bank. The content is designed to stimulate young people’s sense of purpose and will also cover complex issues such as grief, loneliness, well-being and emotional intelligence.

Employees from across the brand company will also support the Apprentice Nation mentorship program by advising and showcasing career opportunities available to young adults in the FMCG industry that they may not have considered. otherwise.

The partnership also supports the company’s broader vision of “Growing for Good” which aims to invest in communities as part of its “Giving Back to Society” values. For the past three years, Lucozade has led B Active, a peer-to-peer sport for development program in association with the Active Communities Network. Since 2018, the initiative has helped young adults living in some of the UK’s most disadvantaged communities in London, Manchester, Belfast, Hull and Newport.

“Lucozade will leverage its scale and reach to promote Apprentice Nation and the Unlocking Your Potential program with a high-profile multimedia campaign launching this fall,” said Matt Riches, head of strategic partnerships at Lucazade owner Suntory Beverage and Food GB&I, owners of Lucozade. “Our Suntory-inspired ‘Growing for Good’ vision drives the business forward and our brands like Lucozade are moving forward to create meaningful collaborations in an authentic way. While the potential is universal, the opportunities are not. Therefore, through this partnership with Apprentice Nation, we will highlight career opportunities and provide meaningful training to young adults from underrepresented communities ”.