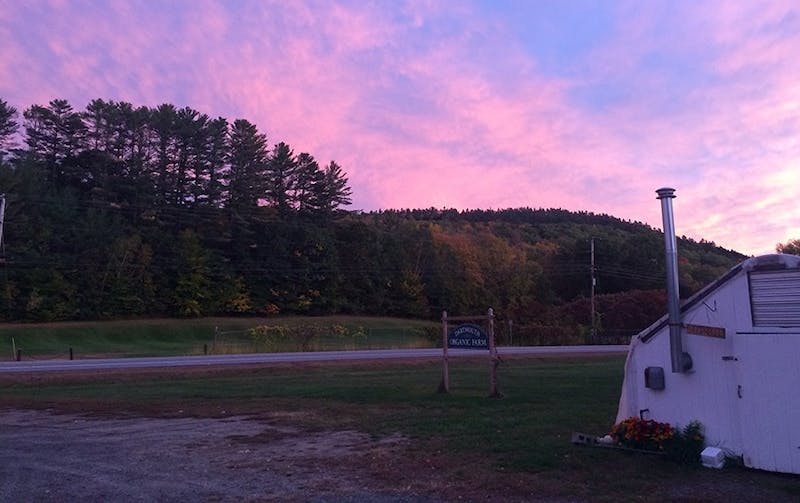 Although Dartmouth students around the world complained about Greek Key’s absence last weekend, a core part of the festival has remained. This Saturday marked the end of Brewhaha’s week of celebration, which unfolded despite the challenges of a distant mandate.

Hosted by Dartmouth Organic Farm, the event is generally a one-day affair that takes place on the Saturday of the Green Key weekend and features local food and live music. This year’s Brewhaha Online featured student-led afternoon workshops on home skills like cooking, brewing and meditation, hosted on online platforms like Zoom and Instagram Live. At the end of the week, pre-recorded performances by student bands were shown in a storefront on O-Farm’s Instagram page.

Rachel Kent ’21, member of the Brewhaha committee, said that by adapting the event to a virtual format, the committee did their best to preserve the focus on food, music and community.

She stressed the importance of events like Brewhaha in keeping the community online, saying she was “certainly grateful that a lot of things like Brewhaha have continued. [because] They miss me a lot.”

Laura Braasch, program manager for O-Farm, said that when she presented her idea of ​​hosting a virtual Brewhaha to students this year, they were excited to bring the plan to life.

Kent said one of the unique perks of the remote term is the extra free time students can have during the week, which is why the organizers have decided to run this year’s Brewhaha over the course of a week. whole. Kent said she hoped Brewhaha could “fill a void” created by the lack of in-person interaction this quarter.

During the week, students attended virtual workshops hosted by students on activities such as yoga, making samosas, and brewing kombucha. The event culminated on Saturday with a compilation of submissions from a cappella student groups, bands and other artists. In recent years, the performances have featured a mix of local students and groups, but Kent said the committee only contacted students for submissions this year, noting that she was excited about the opportunity. to highlight more student artists.

Andy Bean ’23, Music Director of Dartmouth Dodecaphonics, was responsible for compiling his band’s submission. He said the Dodecs wanted to do a recording project during the remote tenure and after hearing about Brewhaha through Dodec’s social media coordinator and emails from O-Farm, they decided to ‘organize a virtual performance. Bean has compiled individual videos of members singing their respective parts. He added that he believes it is important to continue to host events that can be watched remotely with friends.

Over a dozen bands performed at the showcase, including the Rockapellas and student group Moon Unit. The pre-recorded showcase debuted on Instagram and YouTube, where the event garnered more than 400 views.

Earlier in the week, Anna Dodson ’20 ran a ginger beer brewing workshop on Zoom after the committee contacted her due to her home brewing skills. She said she had never brewed ginger beer before, but was excited about an “excuse to try something new” and practiced making it before the workshop. She said the workshop was easy to coordinate and run.

Dodson added that she lacked the “spontaneity” of the Dartmouth campus and that she liked going to an event where “you can just show up and there’s not really a wait for you.”

Dodson also attended several other workshops. The Saturday morning brunch workshop, which consisted of cooking one of three dishes with other students in a smaller “Zoom room”, was her favorite. Students could choose from cheddar and chive cookies, vegan French toast, and maple butter popovers.

She also said she enjoyed the yoga workshop on Zoom Friday, led by Mighty Yoga instructor Emma Miller ’19. Dodson said Miller did a great job on the virtual platform, explaining that she used verbal cues and movement descriptions to alleviate the challenges of a small screen. Dodson said the workshops were “definitely the thing [she had] was waiting impatiently [last] the week.”

Braasch said the workshops were “a really fun way to build community and let people get their foot in the door with the Farm Club.”

She emphasized the importance of providing low-pressure community-driven events for students in addition to academic and after-school programs, especially when faced with the challenges of online learning.

Kent added that trying to publicize Brewhaha was a challenge, saying the committee’s biggest concern was how best to disseminate information to potential attendees.

Although Brewhaha is usually a large community event, Dodson said the workshops were relatively small, with his ginger beer workshop attended by eight people. She explained that remote setting meant students had to prioritize which event to attend, noting that most attendees were involved in the Farm Club or the Sustainability Office. However, she added that the format of the event made it easily accessible to anyone who wanted to join.

Braasch said that while Brewhaha is generally one of the costliest events on O-Farm, the online transition saved them funding because O-Farm didn’t have to pay for it. prepare food. She said the O-Farm does not have concrete plans for the funds saved and the College has discouraged unnecessary spending.

She added that over the summer she hopes to organize volunteer work days at the O-Farm that adhere to public health guidelines, including social distancing and wearing masks.

Braasch will continue to run the farm in person this summer with Sustainability Fellow Molly McBride ’15. Braasch said that despite the lack of student volunteers, the lack of programming has freed up time to maintain the farm and continue to grow fresh produce.

Braasch and McBride will work with Willing Hands, a nonprofit food bank working throughout the Upper Valley, to distribute fresh produce from the O-Farm where the community’s needs are greatest. They also plan to donate vegetables to several families as part of a program with Dartmouth-Hitchcock Medical Center called Moms in Recovery, which provides services to mothers recovering from drug addiction.